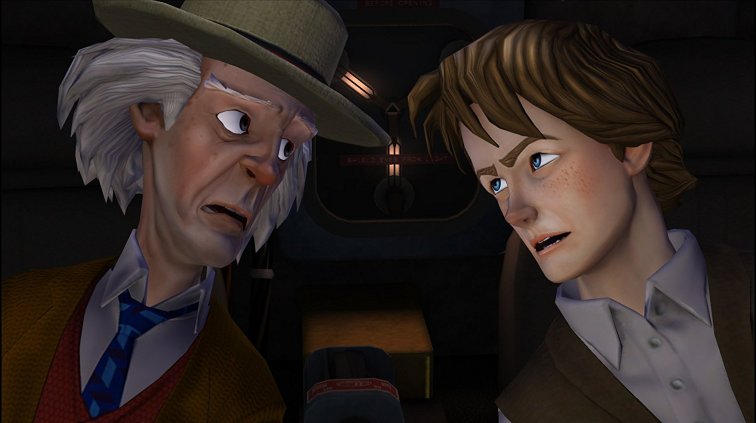 I recently acquired a copy of Back To The Future The Game from the Xbox live Games With Gold service and have decided to share my thoughts after I have completed the game. I’ll do my best to avoid spoilers.

As you’d expect from Back To The Future Marty and Doc are going to the past and trying to save themselves while avoiding paradoxes. With it being Marty and Doc, you can tell that whatever they do won’t be easy.

The episodic game has many interesting characters for Marty to interact with from an old woman that hates youths to Marty’s recurring nightmare of an antagonist Tannen. The game is based around 1931 when prohibition in America prevented alcohol sale in law abiding places which means the Tannen of the time is a gangster called Kid Tannen and he’s just a stupid and nasty as a fan of the films would expect.

The story is strange, twisting and winding as it explores the path which led Emmett Brown to become an inventor including emotional stories about family, destiny and the importance of a loved one’s future happiness over the happiness of others.

The game itself is simple enough with a point and click mechanic found in Telltale Games’ such as ‘The Walking Dead’, ‘The Wolf Among Us’ and ‘Tales from the Borderlands’ so people who like relatively puzzles and Telltale Games’ style of humour will enjoy this game. Fans of Back To The Future would also want to have a go to see what happens next from after the trilogy concluded and if puzzle solving isn’t your thing there is a hint system which can nudge you in the right direction.

Since this is on Xbox I personally have one problem with the game which is the control system using the left stick for direction and the right for targeting. It can sometimes look as if you need to change which direction you are pushing the stick in to continue going forward but you don’t, you actually have to keep pointing it in whatever direction was forward before the camera angle changed which is fairly easy to get used to. The right stick for targeting rather than a cursor can mean you accidentally skim over clickable items and don’t know they’re there which made me get stuck on a simple puzzle just because I didn’t know I could click a certain thing. I did later find out that the game wasn’t telling me that if I press the right trigger I could see all targetable items with a red dot over them.

An engrossing story that fits in with and references the films with enough player interaction to stimulate the brain makes this a game that I happily spent hours playing.

The art that I’m using as the featured image was found on the achievements section of the Xbox website. Flames, the DeLorean and Marty looking at his watch, iconic images from the films have been used to create artwork that will entice fans of the series. They’ve been clever with it.