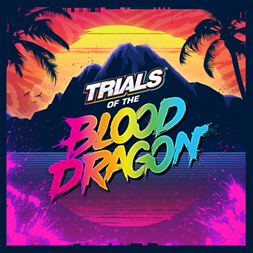 Trials of the Blood Dragon is March’s first Xbox One Games With Gold title and is a combination of things, a side-scrolling motorcycle tilting stunt game and a platformer side-scroller with guns. A crossover of Trials and Far Cry’s spinoff Blood Dragon. There were twenty-seven levels and it kept me busy for most of a day.

The plot starts by telling you that you’re a cyber-commando in the fourth Vietnam war then you’re left to go on your motorcycle to follow the path as the scenery changes around you by collapsing, blowing up or moving just enough to make you splatter on the ground. The story then went absolutely insane, there was something to do with drugs, then an unexpected plot twist, then you had to hunt for the holy grail before another plot twist, after that you were fighting communist insectoid aliens which were apparently the result of the Viet Kong breeding with insect aliens, then you were in space, then for some reason on Mars which led to you being sent to Hell after which you had to go to Japan and kill the Power Rangers, the weird plot finally finished with you commanding a Blood Dragon with a lot more plot twisting at the very end. I don’t want to spoil it too much.

As you go on you find out that a motorcycle isn’t your only vehicle, you also get a large armoured vehicle, a minecart, a hard to control rocket pack, at one point I think there was a bicycle and an RC car. Plus while on your motorcycle you can shoot guns and use a grappling hook.

There are also sections of the game where you are on foot, having to use twin-stick shooter style controls to infiltrate areas while shooting people and doing platforming.

As levels end you are given a grade based on your performance in driving quality and for how much time is left on the level’s timer. Luckily it isn’t game over when the timer runs out or I’d have never completed the game. Alongside the grading you are given a small animal which gains experience and evolves like a Pokemon would, I have no idea why this was in the game as it seemed to serve no purpose.

Levels are selected by clicking on a poster in the hub area where the brother and sister combo who are the main characters spend their time. In the hub you can also access leaderboards, a sticker book that you fill in as you go through the game and a wardrobe that once you’re done can be used to play dress-up when repeating a level.

Was the game hard? Sometimes. It was mostly a game that allowed your brain to relax for a while, not giving you too much to focus on or worry about but there were sections that became really challenging. Lighting and visibility sometimes changed; the bikes weren’t easy to maintain balance with which put some skill into the game; on one level the camera angle was spinning; a spider crab boss confused me for a little bit; the rocket pack sections were just bad in my opinion, especially when I had an extremely sensitive bomb with the weight of a wrecking ball tied to my character; there was an eyeball boss that got me and the Power Ranger’s factory was difficult.

This could have been a game that I’d call great but was let down by random difficulty spikes, the weak platforming sections, the rocket pack and the incredibly confusing plot. I didn’t want to call it average either because I found it surprisingly fun to play, this stood out to me because of how enjoyable it was and it had me laughing when an achievement popped up saying ‘Go, Ninja, Go, Ninja, Go!’ because that was a reference to the Teenage Mutant Ninja Turtles which I loved when I was younger. I would recommend this game, even if it’s just as a time-waster.

I also found out that there’s more content in the Ubisoft Club.

The art that I’m using as the featured image was found on the achievements section of the Xbox website. It’s dark, and half purple but it doesn’t do a good job of representing the game. This artwork doesn’t show anything about the game, it only relates because you ride over hilly terrain and the Blood Dragon is a bit purple.