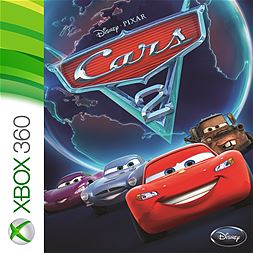 April’s Games With Gold on Xbox360 brought us Cars 2: The Video Game. It is a game about self aware cars racing and having something to do with spies. The game is connected to the film which I haven’t seen so I cannot comment on the accuracy although there is a choice of which of the many characters you wish to play as.

At first I thought that the cars felt quite slow compared to other racing games I’ve played but I spent some time on the game and found that it’s no ordinary racing game. Cars 2: The Video Game felt slow because it was supposed to, so far it is the closest thing I’ve found on Xbox to a Mario Kart game. It’s supposed to be family friendly and probably more fun multiplayer, it wasn’t supposed to be taken as seriously as I was looking at it.

Drifting, jumping, air tricks, reverse steering and ramming can all be performed to give yourself an advantage in the race. There is an energy bar which can be filled by performing any of those actions and when that bar is partly filled a turbo speed boost becomes available, should you completely fill the bar there is an even bigger bonus speed advantage for you. If you aren’t confident with drifting there is an auto-drift enabling option.

There are special pick-ups which will provide the car with a weapon with which it can blast the competition into a few seconds stun, allowing for an overtake in the middle of the race. This is fair because these weapons can also be used against you by other racers. There are even environmental hazards which can damage your character mid race if you aren’t careful.

When I first saw that this was a Disney Pixar game my first thought was cashgrab (a cashgrab is what we call things that are made not to be good but to squeeze more money out of a successful product). As it turns out this is a good effort for a game with a decent amount of features and reasonably fun gameplay. If you like Mario Kart style racing games and don’t have a Nintendo product this may be what you’re after.

The art that I’m using as the featured image was found on the achievements section of the Xbox website. It shows some cars with eyes and mouths which is what they look like in the game. I think the cars shown are the main characters and fans of the film will definitely recognise them. It looks friendly and would appeal to fans so it’s good artwork.