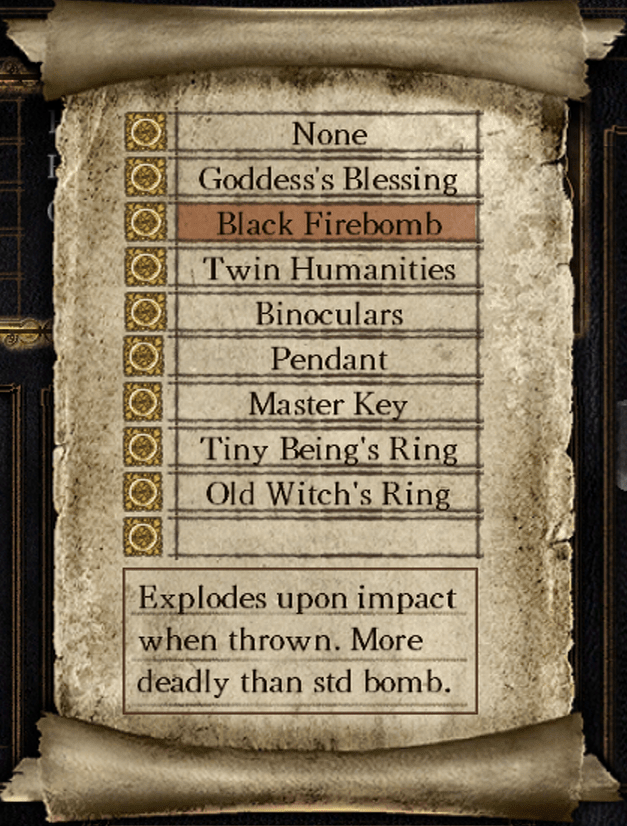 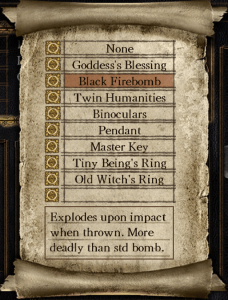 Dark Souls is a game known for being a brutally difficult combat focused adventure game where the world is dying and everything wants to kill the player character. In the character creation the game offers the player some help in the form of a gift. Each gift has its own unique description.

The description of the Black Firebomb is my quote this time. I find this interesting because of the phrase std bomb. To anyone who is putting a reasonable level of thought into it std is short for standard, it makes sense that a special black bomb would be more deadly than a standard one. To someone who isn’t thinking (like me when I started this game after already being quite tired and irritated) this may cause laughter and confusion in the fact that std can be mistaken for STD.

When I first started the game I didn’t know what weapons were available so I was wondering how the STD bomb worked. I looked at it wrong, because of which I interpreted it in a way not intended by the developers.

This quote is interesting because it showed be a combination of ignorance and stupidity that I don’t often find, then I realised it was neither, it was just a mistake and nothing to be ashamed of.

Everybody makes mistakes. Anybody can misunderstand or misinterpret something. Admit to your mistakes and learn from them, that’s what Dark Souls is all about as you stumble around learning your way, trying to overcome obstacles (a bit like life really). This quote was the start of me learning that Dark Souls is a lesson in persistence and that life works in a very similar way. Mistakes are allowable, remember that.

Of course, I could be wrong. Maybe Einstein was right “Only two things are infinite, the universe and human stupidity, and I’m not sure about the former.” (although chances are it wasn’t Einstein that said it, it was just attributed to him. Maybe it was a mistake.)