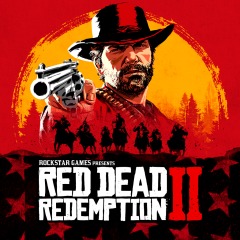 Red Dead Redemption 2 is a third person cowboy game where the player follows the story of a gang that flees from the law in a time when civilisation is growing and wild outlaws are a dying breed.

The game is at its best when characters are interacting, be it in a cutscene or during gameplay the dialogue is really well done. Watching the evolution of characters like Arthur Morgan and Dutch Van Der Linde from outlaw gang members into the people they become was fantastic to the point that if this was a film it would have won awards.

With the characters comes the plot. The escape that there’s always a promise of; the feud between two families; the robberies; being hunted by the law; helping the natives and just trying to make it out alive which adds up into some pretty exciting and climactic stuff. All the while the gang members wonder about the potential of a rat, one of their own acting against them until the law gets its chance.

The combat would be called weak in a lot of games. Using free aim that has auto aim added in is often a way to make shooting easier for players and often it ruins the combat by making it too easy, however this game gets it right. This game makes auto aim work well as you dive in and out of cover popping of shots at an army of foes. Added to the Deadeye feature which slows time it gives combat the right sort of pacing to be fun, even in long battles. There’s even the option for stealth sometimes with silent weapons and silent takedowns.

Pacing though. Pacing is the biggest problem with this game and is what stopped me calling it great. The first few hours of gameplay are slow, if you’ve just painted something you might prefer to watch it dry than play the start of this game. There’s a lot of trudging through snow and maybe too much background being given at this early stage of the game. The game didn’t draw me in as much as I would have liked until the train robbery… which was also quite boring, no explosions, not much fighting and little feeling of achievement or reward.

Get past the slow start and the game opens up into a fun, mission filled world with plenty of mini-games and random encounters to keep the player going. Explore, hunt, meet new people, put on a mask and become the bandit you always wanted to be with rifles, shotguns, snipers and pistols at your disposal you can blow people to bits before stabbing them with a knife or a piercing arrow, then plant some dynamite just to be sure. There is plenty to do and there is a tonne of fun to be had in 1899.

Then the pacing problem kicks in again. The most common mode of transport is a horse which moves relatively slowly given the size of the map. It takes forever to get anywhere or do anything, that’s why the game takes so long to complete. Fast travel is unlocked later in the form of trains and stage coaches but these only go to and from specific locations, slowpoke the horse has to get you the rest of the way but… oh look, the horse has fallen over a fence again because it can jump some but not others. Oh, and the epilogue although slightly heart-warming is also quite slow but it does tie up a loose end in the story.

As for issues with the game itself: Characters went through each other; button prompts didn’t always work; cutscenes failed to trigger; weapon magazine size was limited to two for no reason; items didn’t spawn in cutscenes.

Overall, this game is great but I quickly grew to hate the horses in it. It reminded me of the old assassins creed games for some reason and it was a lot of fun, especially in the main story. This is definitely worth having a go of. I did get annoyed when a mission failed because of the AI teammates dying and the pointless, limiting stamina bar which slowed everything down but all in all it was heavily enjoyable, ruining itself for me with slow horses but it was one of the prettiest games I’ve played in a while.

The featured image is from the PlayStation Store and is a cowboy, probably Arthur Morgan big and central with a gang of cowboys riding from his chest. It’s a cowboy picture representing a cowboy game and the yellow, black and red colour scheme makes it look quite cool. It’s good artwork.