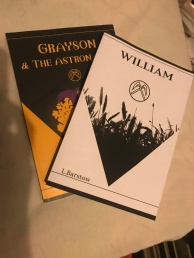 Yesterday I made the decision to unpublish both of my books from the Amazon online store. I also wrote to Amazon to have my KDP account closed. I did this because of a change in the tax rules which I was informed of that same morning. It basically meant I had to apply for a special tax code with my local tax authority as the UK is a part of the EU which is effected by these new rules. I had experienced little success in selling my books so applying for a code didn’t seem worth it. Now the books remain a piece of my past and an achievement that I am proud of just for the fact that I did it.

So, the story of my achievement is that I was a bored seventeen year old who had a pen, some paper and too much time on my hands. Between my As and A-level years at college there was a break and in around a month I had written my first story, WILLIAM. I then spent some time editing it and attempted to contact a few publishers to progress a career in writing. After being ignored by all but one publisher (who was kind enough to send a rejection email) I came across KDP (Amazon’s self publishing service) and had to wait until I turned eighteen and the day after my birthday I published it on Kindle. I then gave my dad some money to buy it for his birthday a few days later; what I’d really bought him was pride in his child. I worked hard to turn it into Paperback form and soon had my first proper book.

After waiting a few months and having some encouragement I started writing again. Inspired by Jason and the Argonauts I wrote a strange sci-fi adventure which had a new race, a created language based on our alphabet, this ended up being named after one of the key characters and a play on the inspiring story it became Grayson & The Astronauts. I published it on both Kindle and Paperback formats around a year after I published WILLIAM then left it. I occasionally tried to promote both books but came to very few sales.

As you’d expect, unpublishing and closing my account was like a punch in the gut, especially after receiving the confirmation email this morning. Sadly it is how it is and this seemed like the best course of action. Copies of the books still exist in the world. Sometimes it can be good to look at an achievement and let it go, it can put you at peace with yourself. So, although I have almost destroyed the most noteworthy thing that I’ve done I am happy with the decision. I never dreamed of being an author, I just drifted into it. Now I can move on and find out what’s next, even if I do feel a bit bad about it at the moment.

However, I have left the previews of my books on the site so if anyone in the publishing industry is interested, I am open to being contacted about them.

I will keep writing as a hobby so I don’t plan on completely leaving this behind. Thank you to everyone who has ever supported me in my writing.

2 thoughts on “The Decision to Unpublish”